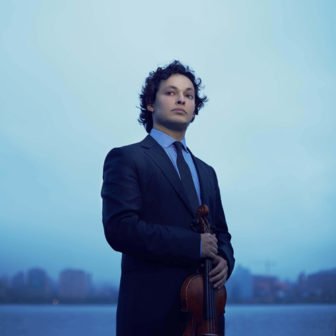 With a “dark-hued tone and razor-sharp technique” (The New York Times), Russian-American violinist Yevgeny Kutik has captivated audiences worldwide with an old-world sound that communicates a modern intellect. Praised for his technical precision and virtuosity, he is also lauded for his poetic and imaginative interpretations of standard works as well as rarely heard and newly composed repertoire.

A native of Minsk, Belarus, Yevgeny Kutik immigrated to the United States with his family at the age of five. His 2014 album, Music from the Suitcase: A Collection of Russian Miniatures (Marquis Classics), features music he found in his family’s suitcase after immigrating to the United States from the Soviet Union in 1990, and debuted at No. 5 on the Billboard Classical chart. The album garnered critical acclaim and was featured on NPR’s All Things Considered and in The New York Times.  His 2012 debut album, Sounds of Defiance, also on the Marquis label, features the music of Achron, Pärt, Schnittke, and Shostakovich. Funded in large part by a Kickstarter campaign initiated by Kutik, the album focuses on music written during the darkest periods of the lives of these composers.

Kutik released his third solo album, Words Fail, on Marquis Classics in October 2016. The album uses Mendelssohn’s Songs Without Words as a starting point to expand upon the idea that music surpasses traditional language in its expressive capabilities, and includes two new commissions by Timo Andres and Michael Gandolfi. Words Fail was Album of the Week on San Francisco’s Classical KDFC, LA’s Classical KUSC, and Seattle’s Second Inversion, which acclaimed in an accompanying review, “Kutik’s violin sings and dreams across two centuries of classical music.”

In April 2019, Yevgeny made his debut at the Kennedy Center, presented by Washington Performing Arts. Additional performances in his 2018-19 season include appearances with the Dayton Philharmonic, La Crosse Symphony, Duluth Superior Symphony, Northeastern Pennsylvania Philharmonic, Springfield Symphony Orchestra, Symphony of the Redwoods, Verde Valley Sinfonietta, the Cape Town Philharmonic in South Africa, and recitals at the Honest Brook Music Festival, Bargemusic, and the Boston Conservatory at Berklee.

Deeply committed to fostering creative relationships with living composers in addition to performing music from the standard repertoire, Yevgeny Kutik has been involved in commissioning and premiering several new works. In January 2016, Kutik and Timo Andres performed the world premiere of Words Fail, a violin and piano piece he commissioned from Andres, at The Phillips Collection as part of a three-concert series curated by Nico Muhly. Upon the release of Words Fail in October 2016, Kutik gave the world premiere of Michael Gandolfi’s Arioso Doloroso/Estatico, which Kutik commissioned for the album, at National Sawdust in Brooklyn. Additional premiere performances include the world premiere of Ron Ford’s concerto Versus with the Tanglewood Music Center Orchestra at Ozawa Hall, the New York premiere of George Tsontakis’ Violin Concerto No. 2 at the 92nd Street Y, and the world premiere of Sheila Silver’s Six Beads on a String, which he commissioned. He has also been involved in the performances of new and rarely played works by Kati Agócs, Nico Muhly, and Donald Martino.

As an extension of Music from the Suitcase, Yevgeny has commissioned a diverse group of today’s leading composers to form his new project, Meditations on Family: A New Collection of Music for Violin. The composers will translate a personal family photo into a short musical miniature for violin and various ensemble. Featured composers include Joseph Schwantner, Andreia Pinto Correia, Gity Razaz, Timo Andres, Chris Cerrone, Kinan Azmeh, Gregory Vajda, and Paola Prestini. Kutik will be recording and premiering the works throughout the 2018-19 season.

Passionate about his heritage and its influence on his artistry, Kutik is an advocate for the Jewish Federations of North America, the organization that assisted his family in coming to the United States, and regularly speaks and performs across the United States to both raise awareness and promote the assistance of refugees from around the world.

Yevgeny Kutik made his major orchestral debut in 2003 with Keith Lockhart and The Boston Pops as the First Prize recipient of the Boston Symphony Orchestra Young Artists Competition. In 2006, he was awarded the Salon de Virtuosi Grant as well as the Tanglewood Music Center Jules Reiner Violin Prize. He was a featured performer for the 2012 March of the Living observances, where he played for audiences at the Krakow Opera House and for over 10,000 people at Auschwitz-Birkenau. Kutik was a featured soloist in Joseph Schwantner’s The Poet’s Hour – Soliloquy for Violin on episode six of Gerard Schwarz’s All-Star Orchestra, a made-for-television classical music concert series released on DVD by Naxos and broadcast nationally on PBS.

Yevgeny Kutik began violin studies with his mother, Alla Zernitskaya, and went on to study with Zinaida Gilels, Shirley Givens, Roman Totenberg, and Donald Weilerstein. He holds a bachelor’s degree from Boston University and a master’s degree from the New England Conservatory and currently resides in Boston. Kutik’s violin was crafted in Italy in 1915 by Stefano Scarampella.