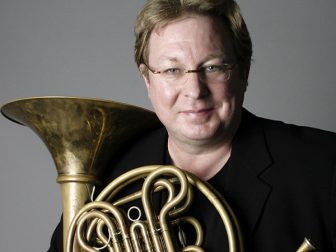 Hailed as “an impeccable solo horn” by the Berlin Neue Zeit, William VerMeulen leads his generation of American Horn Soloists. In Tune magazine says, “the horn playing of William VerMeulen is miraculous!… clearly one of today’s superstars of the international brass scene.” Fanfare magazine writes, “Horn virtuoso William VerMeulen may be the best of the lot, commanding his difficult instrument with suavity and grace.”

He has performed to critical acclaim on four continents as a soloist and chamber musician and is a popular artist at International Horn Symposiums. His recording of the four Mozart Horn Concerti with Christoph Eschenbach and the Houston Symphony is heralded internationally with high critical acclaim and has sold out of its third pressing. A champion of new music, Mr. VerMeulen has had numerous pieces written for him including concerti by esteemed American composer Samuel Adler and Prix de Rome and Stoeger Award winner Pierre Jalbert. A winner of array of awards and honors, Mr. VerMeulen received first prize at the 1980 International Horn Society Soloist Competition and the Shapiro Award for Most Outstanding Brass Player at the Tanglewood Festival.

Arguably the most successful of horn teachers working today, Mr. VerMeulen is Professor of Horn at the Shepherd School of Music at Rice University with students performing in numerous major orchestras throughout the world including the New York Philharmonic, Boston Symphony, Los Angeles Philharmonic, Israel Philharmonic, Cleveland Orchestra, Cincinnati and Dallas Symphonies. He is a member of the Advisory Council of the International Horn Society and also serves as an adjudicator and board member of the International Horn Competition of America and has been a regular coach at the New World Symphony in Miami. In 1985 he was invited to the White House to receive a “Distinguished Teacher of America Certificate of Excellence” from President Reagan and the White House commission on Presidential Scholars.

Mr. VerMeulen received his training from Dale Clevenger at Northwestern University and at the Interlochen Arts Academy and performs on horns, handcrafted and custom made by Keith Berg of Canada and Engelbert Schmid of Germany. He is Founder and President of VerMeulen Music, L.L.C., which offers music and products for horn players worldwide.

Mr. VerMeulen is married to Houston Opera and Ballet violinist Sylvia VerMeulen and they have two lovely children named Michael and Nicole. In his rare free time he enjoys having good friends over to share in his passion for fine cooking and wine.