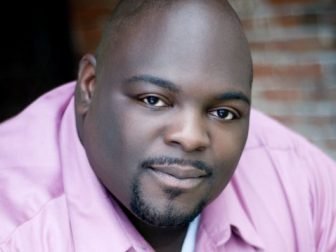 American Baritone Terrance Brown currently serves on the faculty at the University of North Alabama in Florence, Alabama. He is a native of West Blocton, Alabama. Dr. Brown was awarded a Bachelor of Music degree from Samford University in Birmingham, Alabama, and Master of Music and Doctor of Musical Arts degrees from Louisiana State University. Dr. Brown has quickly made a name for himself as a versatile singer and conductor.

An active teacher and stage performer, Dr. Brown has traveled extensively throughout the United States and Europe as a concert artist, recitalist, and operatic artist. He is known for his rich, lyrical baritone voice that is capable of performing a variety of musical styles. His performance credits include: Count Capulet in Gounod’sRomeo et Juliette, Bob in Menotti’s Old Maid and the Thief, Peter in Humperdinck’s Hansel and Gretel, Sarastro in Mozart’s Die Zauber Flöete, Collatinus in Britten’s Rape of Lucretia, Boaz in James Niblock’s Ruth and Naomi, Germont in Verdi’s La Traviata, Voltaire in Bernstein’s Candide, Salieri in Rimsky-Korakov’s Mozart and Salieri, Jake/Robbins in Gershwin’s Porgy and Bess, Le Baili in Massenet’s Werther,Le Marquis in Poulenc’s Dialogues of the Carmelites, and Dashwood in Mark Adamo’sLittle Women.

As an active recitalist and concert artist, Dr. Brown has worked with such fine conductors and coaches as John Keene, Dennis Jesse, Rufus Mueller, Frank Nemhauser, Duaine Wolfe, Kyle Marrero, Jerome Shannon, James Niblock, Lamar Drummonds, Kenneth Fulton, and Timothy Muffit. He has performed as feature soloist with the Canterbury Choral Society, Oklahoma City Ballet, Austin Symphony Orchestra, as well as many other noted performing ensembles. His concert repertoire includes works by Beethoven, Haydn and he recently appeared as a soloist in Beethoven’s Ninth Symphony with the Baton Rouge Symphony Orchestra and the Brahm’s Requiem with the Memphis Symphony Orchestra for the final concert of the southern division American Choral Directors Association convention.

Dr. Brown has also made a professional recording of select works by composer Dinos Constantinides with the Louisiana Sinfonietta. His honors include being named a regional finalist for the Metropolitan Opera National Council Auditions in New Orleans and being selected as a regional finalist for the National Association of Teachers of Singing (NATS) Artist Awards. Dr. Brown’s appearance in Fall 2008 in the opening gala concert of Opera Louisiane was nationally broadcast on PBS in 2009.  He can be seen this 2011-2012 season in the title role of Verdi’s Rigoletto with the Chesapeake Chamber Opera, First Nazarene in Strauss’ Salome, Tonio in Leoncavallo’s Pagliacci, and in solo performances with the Texarkana Symphony and the Tuscaloosa Symphony, for which he will premiere a new work by composer Joseph Landers entitled Sinfonia da Requiem commemorating the tragic losses sustained resulting from the tornadoes which devastated the state of Alabama in the spring of 2011.