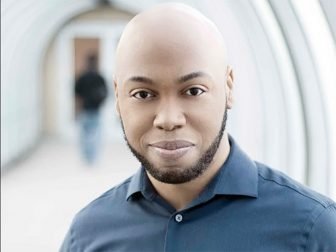 American tenor Roderick George has garnered acclaim in performances on the concert and operatic stages throughout the United States and abroad. Regularly engaged as a soloist in major concert and oratorio works, his repertoire spans from Handel’s Messiah and Mozart’s Requiem, through Beethoven’s Ninth Symphony and Rossini’s Stabat Mater, to Carl Orff’s Carmina Burana and contemporary works by Adolphus Hailstork and H. Leslie Adams. An international performing artist, he has performed throughout Russia, including appearances with the Orpheus Radio Symphony Orchestra and the Symphony Orchestra of the Krasnoyarsk State Opera and Ballet Theatre and on multiple concert tours in Europe and South American as a regular soloist with the internationally acclaimed American Spiritual Ensemble. Among his 2016/17 season engagements is his New York Lincoln Center debut as the tenor soloist in Handel’s Messiah at David Geffen Hall.
​
Roderick George has also made appearances at several international music festivals and venues including Festival Internacional de Musica Sacra in Ecuador, La Folle Journée Classical Music Festival in France, Festival Internacional de la Porta Ferrada in Spain, Festival Internacional de Santander, the Cayman Arts Festival of the Grand Cayman Islands, the American Cathedral in Paris, Lensoveta Palace of Culture in St. Petersburg, Wexford Opera House in Ireland and the Spaso House of the United States Embassy in Moscow.

Equally at home on the operatic stage, Roderick George has performed a diversity of leading lyric tenor roles including Rodolfo in La Bohéme, Pinkerton in Madama Butterfly, Tamino in Die Zauberflöte, Don Ottavio in Don Giovanni, Alfredo in La Traviata, Sportin’ Life in Porgy and Bess, Roméo in Roméo et Juliette, Gérald in Lakmé, the title role of Albert Herring, Ferrando in Cosi fan tutte, Ralph Rackstraw in HMS Pinafore, Benedict in Beatrice and Benedict, Camille de Rosillion in The Merry Widow and David in I Was Looking at the Ceiling and then I Saw the Sky. He will highlight his 2016/17 performance season with his role debut as Nemorino in L’elisir d’amore with Opera Birmingham.

A champion of American art song and an avid song recitalist, Roderick George specializes in song literature based on poems of Paul Laurence Dunbar and Langston Hughes. In 2012, he premiered Adolphus Hailstork’s Four Romantic Love Songs for tenor and piano on poems of Dunbar at the African American Art Song Alliance Conference at the University of California-Irvine. In 2013, he premiered four art songs on poetry of African American poets, including two songs on texts of Dunbar and Hughes, composed by Alabama composer Mary Jackson.

In addition to his active performance career, Mr. George is Professor of Music and Voice Area Coordinator in the Department of Music at the University of Montevallo in Montevallo, Alabama. On the UM music faculty since 2004, he was named the recipient of the 2013-2014 College of Fine Arts Distinguished Teacher Award. Among his credentials are the Doctor of Music degree in Voice Performance from the College of Music at The Florida State University and the Master of Music degree with dual emphases in opera performance and musical theater from the School of Music at Southern Illinois University. He received advanced training in opera at the American Institute of Musical Studies in Graz, Austria.