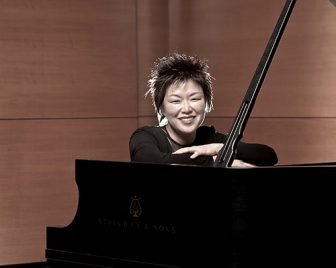 Pianist Katherine Chi, firmly established as one of Canada’s fastest rising stars, has performed throughout Europe and North America to great acclaim. “Ms Chi displayed a keen musical intelligence and a powerful arsenal of technique” notes The New York Times. Recent and upcoming performances include her debuts with the Hamilton Philharmonic Orchestras and the Missoula Symphony Orchestra. Other appearances include the Edmonton Symphony Orchestra, Thunder Bay Symphony Orchestra, and a return engagement at The Gilmore International Keyboard Festival.

Sought after as a concerto soloist of musical and technical distinction, Ms. Chi is noted for the breadth of her repertoire. While hailed for her interpretations of Mozart, she is also acclaimed for performances of major romantic and twentieth century concertos. “…the most sensational but, better, the most unfailingly cogent and compelling Prokofiev’s Third I have heard in years” writes The Globe and Mail. And when Katherine Chi recreated Stockhausen’s landmark work, Mantra, for two pianos and electronics the Boston Globe wrote “when the superb pianists Katherine Chi and Aleksandar Madzar took on the challenge at the Isabella Stewart Gardner Museum on Sunday, it was a welcome opportunity: courtside seats at the creation.” “Chi and Madzar were ensconced among percussion, microphones, and MIDI controllers…, the form unfolding like a venerable suite even as it pushes the modernist envelope.”

Just a year after her debut recital at the age of nine Katherine Chi was accepted to the prestigious Curtis Institute of Music. She continued studies at the New England Conservatory in Boston, where she received her Master’s degree, Graduate, Artist Diploma and Doctorate. She later studied for two years at the International Piano Foundation in Como, Italy, and at the Hochschule für Musik in Cologne. In 2000, Ms. Chi won first prize in Honens International Piano Competition and was the first Canadian, and the first woman to win this award. She was also a prizewinner at the 1998 Busoni International Piano Competition. Her debut recording, on the Arktos label, features works of Beethoven and Rachmaninoff and a new CD for the Honens label was released in 2016.