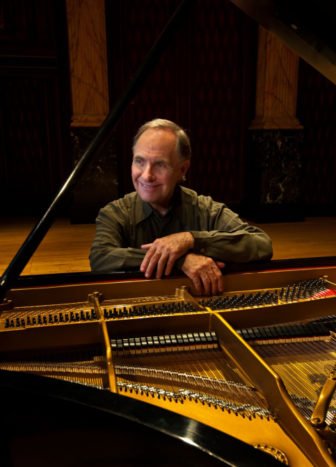 Recognized as one of the truly important pianists of his generation, internationally renowned concert pianist and Steinway artist James Dick brings keyboard sonorities of captivation, opulence and brilliance to performances that radiate intellectual insight and emotional authenticity.

Raised in Hutchinson Kansas, his talent moved him from the farm to the University of Texas Music Building and out to the world’s great concert halls. He received a scholarship to the University of Texas in Austin, studying with Dalies Frantz. Later, he was a Fulbright Scholar and studied with Sir Clifford Curzon in England. Dick’s early triumphs as a major prizewinner in the Tchaikovsky, Busoni and Leventritt International Competitions were a mere prelude to an eminent career highlighted by acclaimed recitals and concerto performances in the world’s premier concert halls, including New York’s Carnegie Hall, Alice Tully Hall, Town Hall and 92nd Street “Y”; London’s Queen Elizabeth Hall, Wigmore Hall and Purcell Room; Le Theatre du Chatelet and Salle Gaveau in Paris; the Academy of Music in Philadelphia; the Kennedy Center and the National Gallery of Art in Washington D.C.; and Orchestra Hall in Chicago.

James Dick has received numerous honors and commendations, including the Texas Medal of Arts, the Chevalier des Arts et Lettres from the French Ministry of Culture, and Honorary Associate of London’s Royal Academy of Music.

He is a fervent supporter of new music, having commissioned Benjamin Lees, Dan Welcher, Malcolm Hawkins and Chinary Ung to write, respectively, “Etudes”, “Shiva’s Drum”, “Rasmandala” and “Rising Light” for piano and orchestra. On February 1998, James Dick premiered “Flight of Passage: From Silent Sun to Starry Night” by Claude Baker. This piece is inspired by poems by Walt Whitman. It was performed in New York (Alice Tully Hall), Paris (Salle Gaveau) and London (Purcell Room).

In addition to his schedule as a world-renowned guest artist, James Dick in 1971 established the Round Top Festival Institute in Round Top, Texas to nurture and incubate aspiring young musicians. The institute (today operated under The James Dick Foundation for the Performing Arts) has grown from a handful of gifted young pianists in rented space on the town square of Round Top to a 210-acre European-styled campus where distinguished faculty each year teach nearly 100 young artists and the Festival Institute provides year-round education and performance programs for audiences.

Today James Dick is well-known to music lovers as a man of great talent, vision and class.