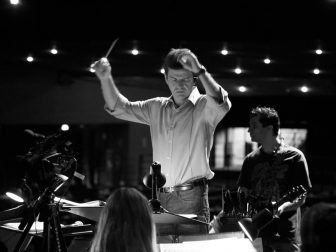 Awarded a visiting artist visa by the United States in 2000, Emmanuel Fratianni arrived in Los Angeles to become a sought after conductor, composer, pianist and music director in the recording industry, classical/crossover and concert world.

An award-winning composer, his scores for video games have been performed by some of the finest and most recorded orchestras in the world, including the Los Angeles Philharmonic, London Philharmonic Orchestra and the Hollywood Bowl Orchestra.

His latest multi media composition “Portale” for orchestra, children choir and international guest soloists was presented in June 2013 to the Mayor of Los Angeles Antonio Villaraigosa during the official opening of the new Tom Bradley International Terminal at LAX. The inaugural piece commissioned by Westfield Corporation was performed live inside the new terminal.

Emmanuel Fratianni’s debut on the Billboard Top-Ten in 2008 with EMI Classics Video Games Live, Vol.1 soundtrack album (as composer, conductor, orchestrator) cemented his status in the classical/crossover orchestral world. His numerous awards and credits as a composer and collaborator include “Soundtrack of the Year” by Play Magazine for the score to Advent Rising, one GANG (Game Audio Network Guild) Award and five GANG Nominations.

A member of the multiple Emmy-nominated music team for the CBS drama JAG for 5 seasons, Emmanuel made a home for himself beginning in 2002 on the major scoring stages in Los Angeles with the Hollywood Scoring Orchestra and the finest scoring musicians in the world. This invaluable experience in television and film scoring sessions is what Emmanuel credits as formidable preparation for meeting the demands of touring production timelines and the essential needs of economy of preparation, management of the diversity of guest artist specialties, and expertise in the sheer variety of musical genres.

Playing piano at the age of six, Emmanuel began his classical music studies upon acceptance to the Montreux Conservatory, in his hometown. As a teen, he discovered the jazz of Oscar Peterson, Bill Evans, Herbie Hancock and began performing publicly at age 14. By his late teens, Emmanuel’s jazz quartet was to debut on the outer stages of the famed Montreux Jazz Festival.

Strongly Influenced by the lyricism of his native Italian folk music and his classical training, Emmanuel’s prolific jazz composing was recognized at the young age of 28 when he was awarded Montreux’s most prestigious commission, for his concerto grosso for jazz quartet and large orchestra, September Suite. The symphony in three movements premiered at the Stravinsky Auditorium, home of the Montreux Jazz Festival. The live recording marked the beginning of Emmanuel¹s recording career, which he has continued in the US and abroad with releases on EMI classics, (on the Billboard charts for 57 weeks) a platinum pop album for Curb Records and video game scores on Nile Rogers Sumthing’ Else records, to name a few.

Musically restless after the September Suite success, Emmanuel’s attention turned towards collaborating with visual and movement artists in Europe when he eventually uprooted to Los Angeles. He continued his training at UCLA in post graduate studies and privately with critically acclaimed, multi-Emmy winning television composers Alf Clausen (of The Simpsons), and Jay Chattaway (StarTrek.)

An educator and clinician, Emmanuel is co-founder of the Southern California Piano Academy, a learning center for the study of piano and is currently in the process of publishing his curriculum for the study of Jazz Piano. His educational scores (video game music for symphony, choir, wind ensemble) are published by Alfred Music Publishing.