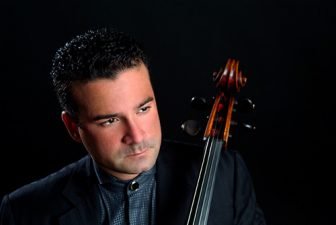 The sound of the critically acclaimed cellist Emilio Colón has been described in prose as, “His glowing tone became a caress of the ears, a prolonged kiss of melody, an embrace…” The American Record Guide has praised his performance as “lively, exciting, expressive and absolutely beautiful,” and has stated, his “playing is full of life and warmth.”

In the Fall 2014 he served as a member of the jury for the Pablo Casals International Violoncello Competition in Budapest, Hungary. He has also been invited as guest conductor and soloist with the Classical Symphony Orchestra of Guatemala, The Texas Festival and Chamber Orchestras, and the Orquesta de Camara Concerto de Puerto Rico; guest soloist for the 2013 Casals Festival, Guayaquil Symphony Orchestra, Loja Symphony Orchestra, and the Puerto Rico Symphony Orchestra; recitalist at La Musica International Chamber Festival in Sarasota, Florida, Festival Tons Voisins in Albi, France, Mill Valley Chamber Music Society, and Barge Music in New York City; Live Radio Broadcast Recital from the Concertgebouw, Spiegelzaal; performances and appearance on screen for the movie Un Poema a L’Exili “EL PESSEBRE” de Pau Casals y Joan Alavedra which received the Best Picture Award at the REUS International Festival in Spain; and featured soloist on tour with the Puerto Rico Symphony Orchestra’s 50th Anniversary of the founding by Pablo Casals.

Highlights of the 2015-16 season include concerts at the Nevada Chamber Music Festival; soloist with the National Symphony Orchestra of Ukraine, guest artist at the Curso Internacional de Música “Ciutat de Xàtiva” in Spain. January and February 2016 marks the premiere festival of the International Chamber Orchestra of Puerto Rico of which Emilio is the founder and artistic director.

His recordings are featured on the Enharmonic, Centaur, Zephyr, and Lyras labels. Colón has also recorded for Klavier as solo cellist, chamber musician, conductor, and composer under the label. As an international cultural advocate, he has been guest artist at many national and foreign embassies most recently receiving the US Ambassador’s Cultural Diplomacy Award for his work in improving the relations between the US and foreign countries.

Colón is on the faculty of the Jacobs School of Music at Indiana University where at the age of 26, he was appointed as one of the youngest in the history of music schools in the United States. He has since established himself as a leading pedagogue having offered courses at the Paris Conservatoire, the Geneva Conservatoire, the Franz Liszt Academy of Music in Budapest, Toho Gakuen in Tokyo, the Hochschüle für Musik in Stuttgart, and the Royal Academy of Music in London. He is currently Artist-in-Residence at the Conservatorio de Musica in Puerto Rico and on the faculty as conductor and cellist of the International Festival-Institute in Round Top, Texas, and on the faculty of Mammoth Lakes Music Festival, Killington Music Festival, and the Indiana University Summer Music Festival.

Colón’s arrangements, editions and original compositions are published by Masters Music Publications, Edwin F. Kalmus, LudwigMasters Publications, and H.P. Music Publications. Colón’s debut as a recorded composer took place with his ta”N”go for piano trio as featured on Trio Amadé’s recording with Klavier, “Obseción.” Recent performance highlights of his compositions include the premiere of Recuerdos de Tata for cello & orchestra with Colón as EC Malta concert soloist as well as the premiere of Dana la Colorá’ for Double bass & Piano performed by James VanDemark, recently heard on NPR in New York City and Los Niños y las Minarets for Piano Trio, and Los Jolgoriosos for Violin & Piano. His acclaimed arrangements have been performed around the world, including the 6th American Cello Congress where Colón’s arrangements were chosen as the centerpiece of the main ensemble concert program.

An active chamber musician, Colón played with the Emile Beaux Jeux Piano Trio, which won a grant for two consecutive residencies from the National Endowment for the Arts and a sponsorship from Chamber Music America. Colón was a member of the faculty at the New World School of the Arts in Miami, where he performed throughout Florida as a member of the string ensemble, Trio Vizcaya. He was also a member of Trio Amadé, the resident ensemble at Florida Atlantic University, and was a Dorothy F. Chandler Schmidt Eminent Scholar in Music at Florida Atlantic University in Boca Raton, Florida.

As a student and later colleague of the distinguished cellist and pedagogue, Janos Starker and legendary violinist, Joseph Gingold, Colón earned a master’s degree from the Indiana University School of Music. Colón received a bachelor’s degree as a student of Joaquín Vidaechea, from the Puerto Rico Conservatory of Music, where he won the Pablo Casals Medal upon graduation. Colón had additional studies with Antonio Janigro at the Mozarteum in Salzburg, and at the Academia Chigiana in Siena with André Navarra. Emilio is endorsed by D’Addario and performs using their strings on his Amati cello from 1700.