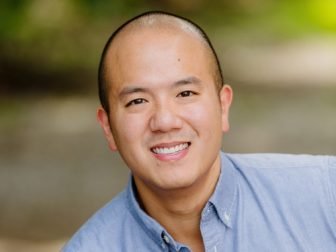 Touted by the Oregonian as “vocally commanding”, baritone André Chiang brings his lyrical voice to repertoire spanning from Handel to Glass. This season, Mr. Chiang’s engagements include Anthony Hope in Sweeney Todd and Barone Douphol in La traviata, both with Virginia Opera, Prince Yamadori in Madama Butterfly with Ash Lawn Opera, as well as his return to Portland Opera as Falke in Die Fledermaus. Past season highlights include Ford in Falstaff, Yamadori/Registrar in Madama Butterfly, Maximillian/Captain in Candide, Young Galileo/Salviate in Galileo Galilei, and Argante in Rinaldo, all with Portland Opera; Masetto in Don Giovanni and El Gallo in The Fantasticks, both with Shreveport Opera; Le Dancaïre in Carmen with Virginia Opera; Guglielmo in Cosi fan tutte with The Washington Idaho Symphony; Dottore Grenvil in La traviata with Mobile Opera; and Ctésippe in Pénélope, Il Conte in Le nozze di Figaro, and Falke with the Manhattan School of Music. Mr. Chiang is also a graduate of several prestigious apprenticeships, having spent summers as a Gerdine Young Artist at the Opera Theatre of Saint Louis and with the Glimmerglass Festival, covering Nathan Gunn as Lancelot in Camelot, as well as performing the role in their Young Artist Matinee. Along with his stage work, he is equally comfortable in recital and concert. These credits include “A Romantic Evening” with La Grange Symphony Orchestra and an orchestrated concert of Vaughan-Williams’ The Songs of Travel under the baton of George Manahan. Mr. Chiang was a Regional Finalist for the Metropolitan Opera National Council Auditions, the La Grange Symphony Orchestra Young Artists Competition Winner, finalist in the Liederkranz Art Song/Lieder competition, winner of the Grand Concours de Chant for French song, and winner of the Eisenberg – Fried Concerto Competition for Voice at the Manhattan School of Music. Upcoming engagements include returns to Virginia Opera (Il barbiere di Siviglia) and Opera Birmingham (L’elisir d’amore).