From its first rehearsal on February 16, 1955 – in the Butler High School band room – to a contemporary world-class presence today, the Huntsville Symphony Orchestra has been guided continuously by its mission to bring extraordinary musical and educational opportunities to the people of Huntsville, Madison County, and the greater Tennessee Valley.

Cellist Alvin Dreger, the first manager of the HSO, had realized that the Alabama cotton mill town of 16,000 residents was transforming into an international center for the burgeoning aerospace industry. He also knew firsthand that many of the area’s German emigres were keen enthusiasts and practitioners of classical music. In fact, Werner Kuers, a senior member of the rocketry team, was Concertmaster of the HSO in its inaugural performance on December 13, 1955.

Canadian-born Arthur M. Fraser was the HSO’s founding Music Director (1955-59) as well as the founding director of the Birmingham Civic Chorus. Fraser encouraged the development of the early HSO infrastructure, including the first Board of Directors, and believed so strongly in the mission that he accepted only travel reimbursements and an occasional honorarium when there were excess funds.

The Huntsville Symphony Orchestra Guild was officially organized in June 1960, with Mrs. Jesse (Mildred) Anderson serving as the first President. For generations, the Guild has worked energetically to promote the orchestra’s health, growth, and community engagement through enthusiastic advocacy and award-winning fundraising initiatives such as the annual Crescen-Dough Auction, first held in 1974.

Indeed, Crescen-Dough was originally conceived as a one-time event to support the commission of a new oratorio – Galileo Galilei by Lee Hoiby – to celebrate the opening of the concert hall at the Von Braun Center, which has remained the orchestra’s performing home since.

Today the Huntsville Symphony Orchestra is one the region’s premier music ensembles, having grown in tandem with our amazing city. Each orchestra season offers a Classical Series, a Pops Series, and a set of more intimate and informal Casual Classics Concerts – as well as Young People’s Concerts and a FREE Family Concert for the benefit of the entire community. 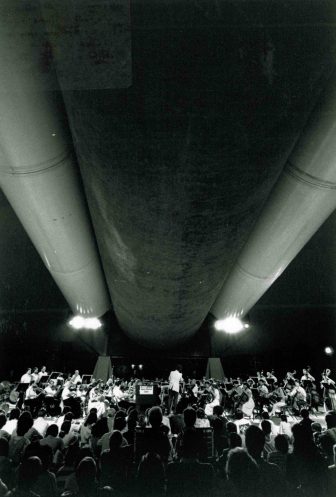 Concert Under the Space Shuttle

Our orchestra roster includes many of the nation’s best and brightest symphonic musicians, and the HSO routinely engages featured soloists of international standing. We are proud of ongoing collaboration with local performing partners such as the Huntsville Community Chorus Association, Fantasy Playhouse Children’s Theatre, the Huntsville Ballet Company, Theatre Huntsville, and Huntsville M.ET.

Through the HSO Symphony School, we are thrilled to offer educational programs for everyone, from our Third Grade Violin Program in the public schools to lessons, classes, and amateur ensembles for music lovers of all ages.

“Music self-played is happiness self-made,” Mr. Dreger wrote in January 1955. This was his invitation to local musicians to organize an orchestra for the city.

We invite you to experience a Huntsville Symphony Orchestra performance soon!