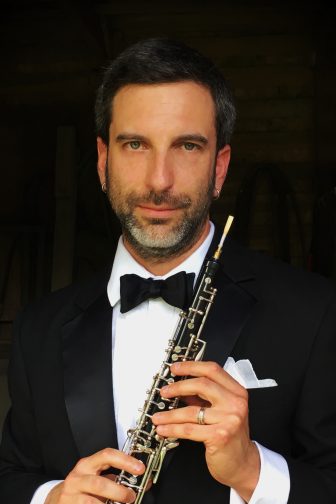 Carey Shinbaum has been principal oboe of the Huntsville Symphony Orchestra since 2001. He currently also serves as English horn with the Chattanooga Symphony and Opera Association (CSOA). He is Artist-in-Residence at Saint Nicholas School in Chattanooga, where he teaches music and technology.

A native of Fort Payne, AL, Carey Shinbaum’s formative musical experiences took place while growing up in Chattanooga. During his teens, he performed as soloist and substitute member of the CSOA. He received the Andrew Carnegie Merit award to attend Carnegie Mellon University in Pittsburgh, where he studied oboe with Cynthia DeAlmeida and chamber music with Elden Gatwood. He went on to receive his master’s degree at the Cleveland Institute of Music, where he studied with John Mack, principal oboe of the Cleveland Orchestra.

Building upon his experience as an elementary educator, Carey has developed numerous programs with engaging extra-musical themes for the Young People’s Concerts in both Huntsville and Chattanooga. He has played the multi-voiced narrator in Lemony Snicket’s “The Composer is Dead” with the orchestras of both cities. Other years featured his original scripted shows with such dynamic character roles as Cowboy Carey, Bobo (the oboe playing) Clown, Chris “Shindo”, and YeraC the Alien. He finds these projects extremely rewarding.

Carey lives with his wife, poet and teacher Laura Howard, and their cat Louis KC.